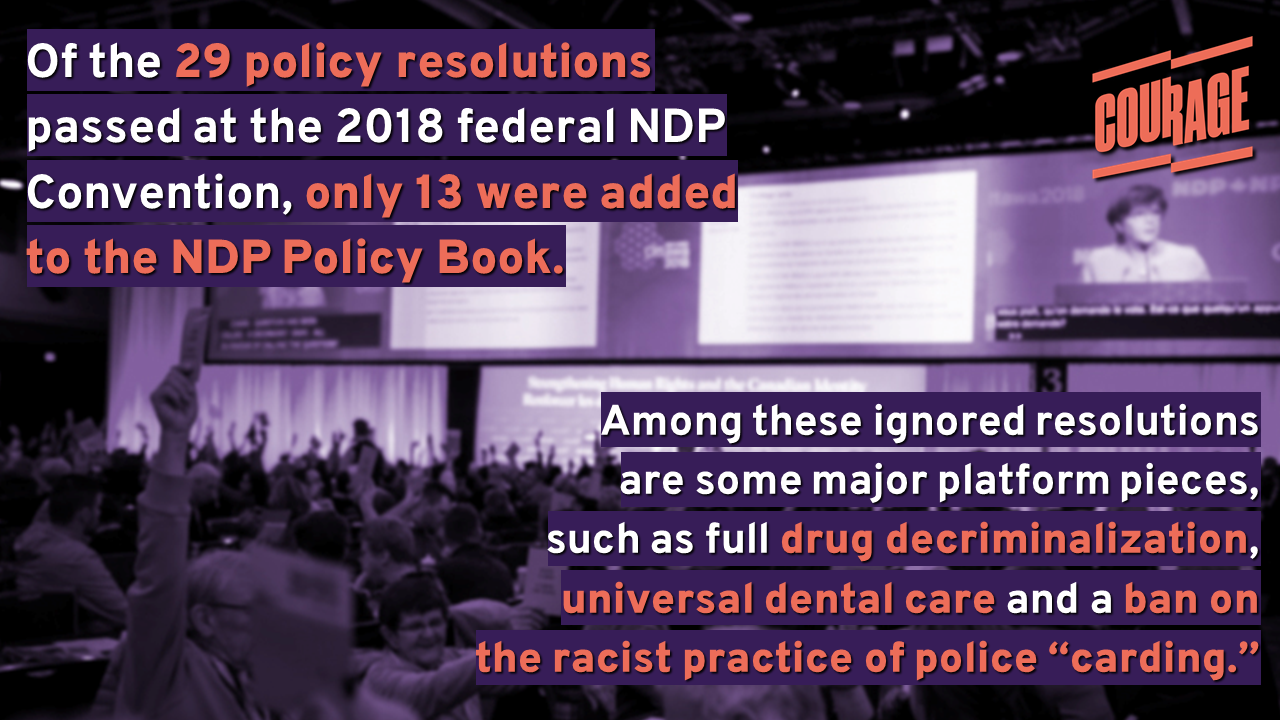 With the federal NDP convention quickly approaching, our membership has been hard at work preparing resolutions to send to the convention floor. We intend to use convention as an opportunity to continue our work of engendering a greater degree of democracy within the party, and pushing a bolder, more transformative political agenda.

Unfortunately, some of the information that’s come to light as part of this convention prep work has shaken our confidence in the existing democratic structures of the federal NDP.

A big part of our research into how we could most meaningfully participate in the convention process involved taking a look through the party Policy Book, which theoretically includes all the policy items that previous conventions have voted to adopt as official party policy, as well as the list of resolutions that were passed at the last federal convention in 2018. What we discovered when we compared these two sources is that there are several resolutions the membership passed in 2018 that simply never made it into the Policy Book after convention.

In total, the membership voted in support of 29 different policy-related resolutions in 2018 (not including non-policy resolutions regarding internal party business, campaign strategy, etc.) Of these 29 policy resolutions, only 13 have been added to the version of the Policy Book that appears on the 2021 convention website. The rest appear to have been simply disregarded by the party.

Among these ignored resolutions are some fairly major platform pieces, such as full drug decriminalization, and a ban on the racist practice of police “carding.” Perhaps most egregiously absent from the Policy Book is a commitment to fighting for socialized, universal dental care. This resolution passed nearly unanimously at the 2018 convention, is nowhere to be found in the Policy Book, and was substituted for a much weaker means-tested dental care proposal in the NDP’s 2019 election platform.

This is an unacceptable contravention of the NDP’s Constitution, which plainly states that convention is the highest decision-making authority within the party (article V, section 5). Whether through a deliberate attempt to subvert internal democracy, or simply through incompetent stewardship of the Policy Book, the federal executives tasked with interpreting the will of the party’s membership have failed to live up to this responsibility.

We have prepared a full account of all the policy resolutions passed at the 2018 convention, indicating whether or not these resolutions were included in the “updated” Policy Book that’s currently published on the 2021 convention website. We encourage other interested parties to check our work and verify these findings; every policy session from the 2018 convention is archived on the CPAC website, so the exact outcome of every vote on every resolution is in the public record. We have also archived the Policy Book as it appears on the 2021 convention website as of this writing in January 2021, and uploaded a copy of the full text of all 2018 convention resolutions. (Note: this document contains all resolutions that were submitted to convention, of which there are several hundred. Our spreadsheet linked above shows which ones made it to the convention floor and were passed.)

We call on the party to take immediate steps to remedy this issue, and we will continue to follow up as needed to ensure the will of the membership is carried out appropriately by party officials.

While this discovery has somewhat eroded our confidence in the ability of grassroots movements to have a meaningful voice within the NDP, we nonetheless intend to continue pushing for more transparency, more accountability when breakdowns like this occur, and a more robust democracy within the NDP. We hope you’ll join us in this fight, at the 2021 convention and beyond.