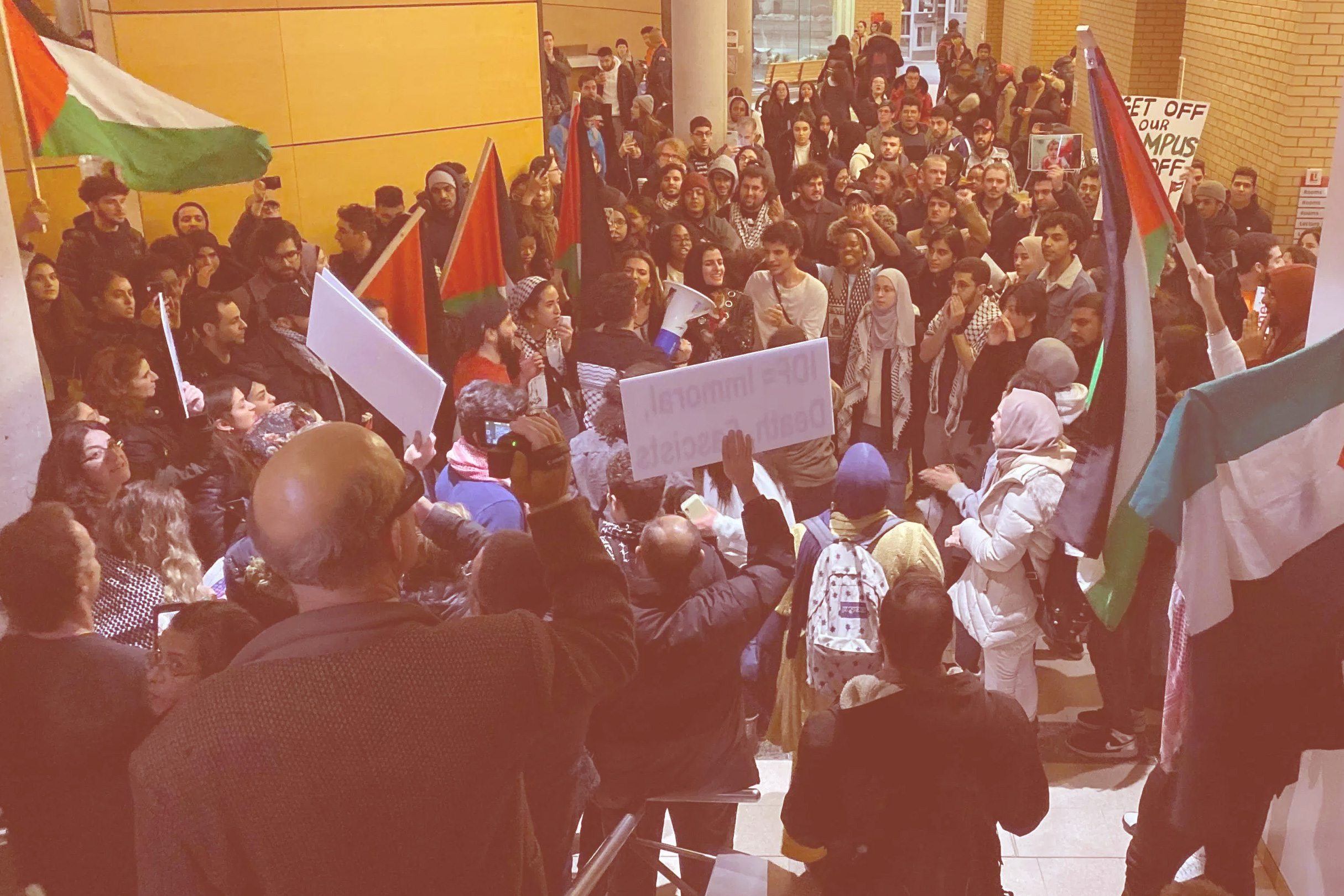 On November 20, Israeli Defence Forces (IDF) soldiers came to York University campus to discuss their experiences serving in occupied Palestine. The IDF has been cited by the United Nations for targeted shootings of unarmed, peaceful protesters, and has been condemned by Amnesty International as well as Israeli human rights organizations like B’Tselem.

A peaceful but energetic counter-protest was organized by York students, with the aim of asserting the Palestinians’ right to self determination and disrupting what was clearly an attempt to whitewash the 50-year military occupation of the West Bank and Gaza. The event also appeared to be a thinly-veiled attempt at recruiting volunteers for the Israeli military, which has subjected a population of millions of people to daily humiliation and institutionalized violence. (Recruitment for foreign military forces on campuses is illegal in Canada.)

The IDF has imposed extensive, prohibitive travel restrictions, overseen the continual theft of land and scarce resources like water, conducted hundreds of political assassinations and engaged in routine property destruction (including the demolition of over 3,000 homes). Lately, it has increasingly taken to imprisoning children, while engaging in censorship of Israeli human rights organizations that condemn its violence.

The protest was immediately spun as “hate-filled” by Ontario Premier Doug Ford, who took care not to make any specific accusations while characterizing the protest as “vile hatred”.

York University President Rhonda Lenton also condemned the protest, saying “shouting, threats of violence and attempts to intimidate community members are not consistent with the responsibilities we all share.”

All three actors are clearly being disingenuous and opportunistic in their characterizations.

Missing from Ford’s, Trudeau’s and Lenton’s accounts is a key fact: the only violence that has been documented at the event came from pro-Israeli thugs associated with the Jewish Defense League (a far-right, racist group, the JDL has been classified as a terrorist organization by the FBI since 2001), who punched, shoved and choked pro-Palestinian protesters, leading to several injuries and at least one hospitalization for a head injury.

This one-sided violence was reported in the National Post as follows: “there was a physical altercation involving several people, and one person suffered minor injuries.”

Similar, transparent attempts to implicitly ascribe the violence to pro-Palestinian protesters are nearly ubiquitous in the corporate media.

Media has suppressed the truth of what happened, while giving prominent placement to skewed mischaracterizations coming from Liberal and Conservative politicians. This is, needless to say, a shameful abrogation of journalistic responsibility and a violation of public trust.

Many groups have denounced the outright lies and misleading statements about November 20th at York, including CUPE 3903, the York Federation of Students, University of Toronto Graduate Students’ Union, Independent Jewish Voices, Christian Peacemaker Teams International, If Not Now Toronto, Amnesty International (York University Chapter) and Students against Israeli Apartheid York. The Ontario NDP and the Federal NDP, meanwhile, have been silent, neglecting a basic duty to stand up for the truth.

Courage condemns all forms of hatred, and believes that anti-semitism must be confronted wherever it appears.

Characterizing opposition to the Israeli military’s occupation of Palestine as anti-semitism, however, is dangerous and misguided, and makes confronting actual anti-semitism more difficult.

Courage is disappointed with the silence of Andrea Horwath and Jagmeet Singh. Ford’s and Trudeau’s deliberate smears of the York protesters represent a clear opportunity to stand up for the truth, and for movements for justice and peace. Both leaders have so far failed to take that opportunity.

Randall Garrison, the NDP Critic on National Defence (as of Nov 27), recently retweeted official IDF propaganda. Fifty-two years into a brutal, one-sided, military occupation, anything but moral and political clarity from the NDP is unacceptable.

The NDP can do better, and must. Garrison should publicly defend a position in line with the NDP’s policy book, or step down.

We stand with the Palestinian solidarity movement at York University, and across Canada. We look forward to a day when the NDP will be a voice for those in Canada who cannot return to their homeland, and for those who believe in justice and peace for Palestinians and Israelis.