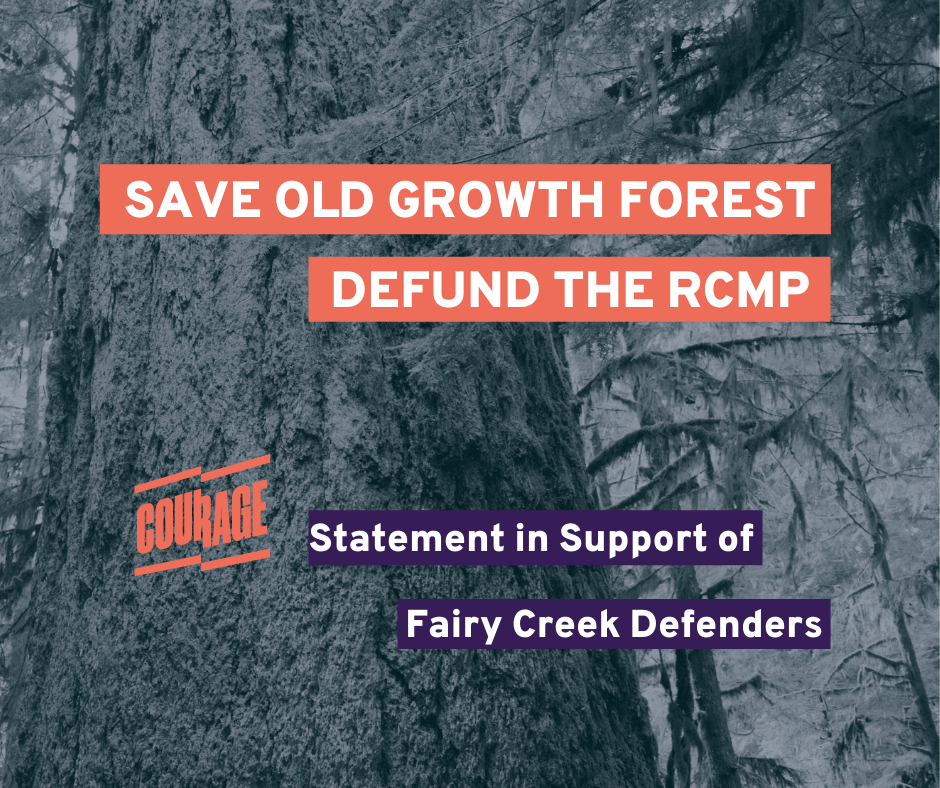 As we bear witness to more and more footage of colonial violence happening at Fairy Creek, which is now the largest act of civil disobedience in Canadian history,  we express our commitment to DEFUNDING THE RCMP. Carrie Saxifrage, in her shockingly descriptive account of the goings-on at the protest camp, details several unacceptable activities carried out by the RCMP on forest defenders. We are in solidarity with old-growth forest defenders.

Courage joins the Wilderness Committee in their condemnation of the RCMP’s illegal injunctions and in their call to the BCNDP to commit itself to the fourteen recommendations made by the independent panel on old-growth forests in BC.

Historically, police have been tools for capital to oppress the working class, as well as colonial tools of oppression. America’s police system originated in its slave patrols — Canada’s RCMP are no different. Throughout its history, the RCMP has harassed and murdered Indigenous people just as much as their municipal counterparts in city police divisions have. Indigenous people make up 40% of the prison population while only making up 4% of Canada’s population.

Canadian colonial and capitalist violence is not a thing of the past, and it is causing great harm to people at this very second.

Courage pushed for Defunding the RCMP at the NDP federal convention and we are recommitting ourselves to pushing for this position until the RCMP is completely dissolved.

The police are one part of the system that perpetuates harm toward our BIPOC communities across the land. While the abolition of the RCMP, provincial police, and municipal police forces will not be the end of decolonization and reconciliation, it is a crucial step and must remain at the forefront of the conversation.

Courage calls upon other organizations and individuals to join our efforts in police and prison abolition at the federal level.

We invite you to learn more through the non-exhaustive list of resources below.