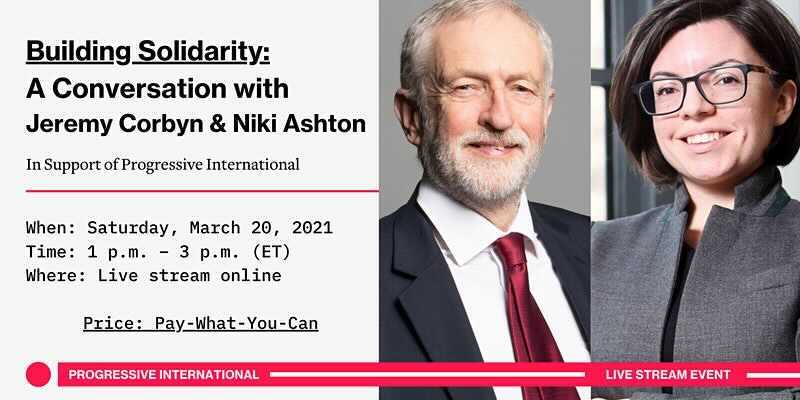 As Canada’s labour party, the NDP has a duty to act in solidarity with the social justice struggles of working people, the racialized and those who suffer from injustice because of disAbility or sexual orientation or gender. The March 20, 2021 online event, “Building Solidarity”, features a conversation between NDP MP Niki Ashton and British Labour Party MP Jeremy Corbyn. The event is being held as a fundraiser in support of Progressive International, a global network of progressive thinkers and politicians of which Ashton is a Canadian member. The organization, co-founded by Sanders Institute, includes on its Council Noam Chomsky, Naomi Klein, Yanis Varoufakis, Cornel West, and others. Member groups include many social movements including, for example, the Democracy in Europe Movement 2025, Solidarity Party of Afghanistan and Chile’s Convergencia Social, and Code Pink. Such international collaboration provides a welcome and necessary opportunity for organizations of the left to work together.

The Ashton-Corbyn dialogue is meant to unite efforts against neoliberalism and capitalist oppression. It is also a welcome echo of the 2019 meeting during which NDP leader, Jagmeet Singh spoke in the same spirit of solidarity with then British Labour Party leader, Jeremy Corbyn.

It is gratifying to those who struggle for social justice that a prominent representative of the NDP should join hands with a proven progressive and anti-militarist from the UK Labour Party. Jeremy Corbyn’s list of commendations includes: the fight against South African apartheid (in opposition to the British Conservative Party), opposition to Tony Blair’s support of George Bush’s imperialist assault against Iraq, and support for minority rights in his work as a Parliamentarian.

This inspiring meeting has been attacked by the conservative establishment in the media and apologists for Israel’s settler-colonialism who repeat false slurs against the reputation of brother Corbyn. One can find a very apt repudiation of the witchhunt against him and the tendentious nature of the report of anti-Semitism against him in this article by Jacobin Magazine.

What is much more disturbing, however, is the Broadbent Institute’s Rick Smith’s public tweet repeating the same calumny against Jeremy Corbyn. Mr. Smith is thus content to act as a mouthpiece for a vicious anti-justice right wing, but also, by implication of his ties to the NDP, positioning the NDP on the wrong side of social justice. It is up to the NDP to repudiate the criticism which is based on a relentless smear campaign carried out by an unprincipled combination of the Blairite wing of the BLP, the capitalist press, the racist Conservative Party, and well-funded right wing pro-Israel/anti-Palestinian organizations.

Corbyn has shown himself over many years to be a fighter against anti-Semitism and all forms of racism. Corbyn’s record is one of solidarity with victims of racism and classism. He has fought against neo-Nazis, against Holocaust deniers, and attacks against the Jewish community over his entire career. And still, within the BLP, the pro-Israel lobby has succeeded in sabotaging Corbyn’s leadership and producing a report replete with inaccuracies and innuendo to condemn him as compromising with anti-Semitism. He and his fellow socialists in the BLP have paid the price for being principled anti-imperialists. It should be noted that many of those whose memberships have been suspended are Jewish socialists, supporters of the Palestinian cause.

The attack by the right wing CIJA, a conservative Canadian lobby group for the Israeli government, purports to represent Jewish opinion in Canada. In fact, there are more than 40 Jewish groups in Canada and the UK who support Corbyn as an anti-racist and a friend of the Jewish people as well as of the oppressed Palestinian people. Independent Jewish Voices in Canada has expressed its solidarity with the Progressive International event and dismissed accusations of anti-Semitism against Corbyn.

We, of Courage Coalition enthusiastically support the Progressive International dialogue between Niki Ashton and Jeremy Corbyn. We call upon NDP leader Jagmeet Singh to support this international effort of solidarity and to refuse to  be bullied into accepting scurrilous attacks against Niki Ashton. The vision of the NDP must be to resist the forces of hate, inequality, militarism, and imperialism and to help build a just future by allying with the victims of injustice.