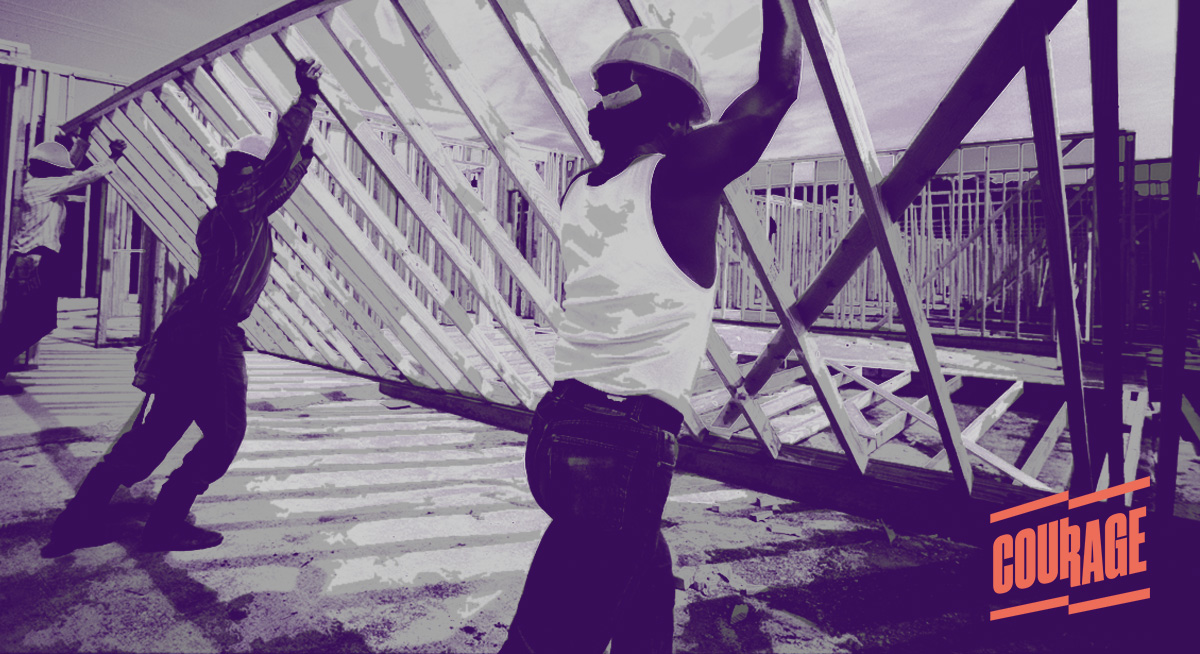 Since January, Canada’s unemployment rate has nearly doubled. . But even before the pandemic, over a million people were unable to find work — and that’s without counting those who had stopped looking. The amount of suffering that this number represents is difficult to imagine.

Everyone who wants work, should have dignified, accessible living wage employment.

And let’s be clear, there is a lot of work to do: transitioning to a zero-carbon economy will require a top-to-bottom overhaul of housing, transportation, production, and care.

That’s why a federal jobs guarantee needs to be the cornerstone of an economic recovery, from the effects of the pandemic and for the climate.

What is a jobs guarantee?

A jobs guarantee is what it sounds like: everyone who wants a job can get one. A new federal agency (the Comprehensive Rapid Employment Agency for Treaties and the Environment – CREATE) would be created and charged with administering jobs and training programs across a variety of public sector agencies. Anyone could show up and sign up for a living-wage job, or paid full-time training program leading to long-term work.

Some of the jobs that could be filled to address the effects of COVID:

Beyond the pandemic, we need to put people to work caring for our future generations and preserving the planet for them:

There are many other pressing needs: building green infrastructure, planting trees, building green social and cooperative housing, and growing food and enhancing food sovereignty – to name just a few.

The cost of such a program would be significant: in the multiple tens of billions per year, depending on the level of participation. However, it would have many important effects beyond creating a model for rapid decarbonization that is necessary for planetary survival:

By comparison, Canada’s military budget is over $21 billion per year. Corporate tax cuts passed by the Liberals have deprived the government of over $10 billion in revenues. Plus, corporations dodge the remaining taxes by at least $11 billion per year by using tax havens. Meanwhile, the fortunes of Canada’s billionaires are ballooning.

There is an estimated $700 billion in “dead money” that Canada’s corporations are not investing to expand operations or create jobs, instead pouring it into speculation and driving privatization. Taxing the super-wealthy and corporations to fund a jobs guarantee would put that money to work for people and the planet.

How does this help Indigenous communities?

The economic deprivation in First Nation, Metis and Inuit communities generally stems from lack of access to land – land that is frequently stolen in violation of treaties and inherent rights. However, Indigenous communities have also missed out on a wave of economic development driven by expansion of public services in the post-war period.

A jobs guarantee that respected Indigenous sovereignty could be a seismic shift away from poverty and social and environmental crises, and create a new economic footing for communities that have seen some of the worst effects of land theft, funding cuts, and pollution.

What about people who can’t work?

One effect of the CERB was to expose how absurdly low so-called disability and social support benefits are. In Ontario, for example, people living on disability must make do with $1,100 per month, a little over half of the CERB payments.

A jobs guarantee – with its massive influx of economic stimulus, improved quality of life and increased tax revenues – should be used as leverage to set the minimum provincial disability benefits at $2000, with cost of living adjustments in remote or urban areas with higher costs, and an additional amount to account for the increased costs of life while disabled.

Employment Insurance has also been deeply eroded by both Liberals and Conservatives. It’s a service that people pay for, but payments have been reduced, quotas for disqualifying people have been set, and billions have been stolen from the fund – effectively to pay for corporate tax cuts and oil industry subsidies. Comprehensive reform of EI is also necessary.

What about migrant workers and undocumented workers?`

The government has denied human rights and labour rights to temporary foreign workers and undocumented workers, many of whom were and are essential workers during the pandemic. And employers in Canada have taken advantage, exploiting vulnerable populations and paying those workers substandard wages.

For a jobs guarantee to be effective, it must be implemented in tandem with a Status for All policies – as proposed by migrant workers and civil society and movement organizations.

When a jobs guarantee gains traction, watch out for corporate economists to appear in the media, warning of inflation. While paying people a living wage will lead some goods to cost a bit more, a well-implemented jobs guarantee would lower the cost of the central items in household budgets, like food, transportation, education, childcare and housing.

How will we get a jobs guarantee?

The idea of full employment hasn’t been seriously discussed in Canada in decades. Currently, no political parties are proposing a jobs guarantee. The idea has much more traction in the United States, where progressive voices like Alexandria Ocasio-Cortez and Bernie Sanders have put forward proposals. As the climate crisis deepens and the economic “recovery” claims more victims, we need to collectively demand a jobs guarantee, and put forward federal candidates who are in office as representatives of the people, not corporations.

Has anyone done this before? Where can I find out more?

Most of the serious discussion has been in the US. Policy researchers like The Centre on Budget and Policy Priorities (CBPP), the Levy Economics Institute,  and the Centre for American Progress have all published in-depth discussions of how a jobs guarantee could work.